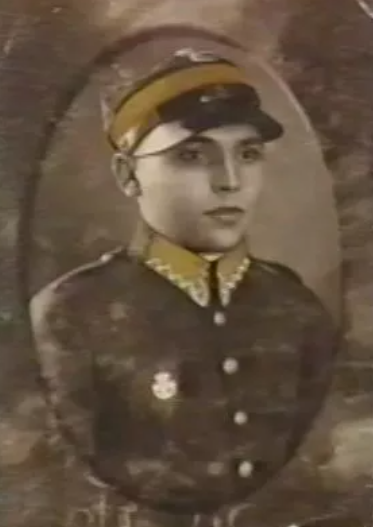 Eliahu Ostashinski was born near Novogrudok, Poland, now Belarus, where he worked as a blacksmith. Before the war, Eliahu served in the Polish Army and was promoted to Sergeant. In 1939, he married Rochel Berman. On June 27, 1941, their daughter, Sara Frayda, was born.

During the first years of the war, Novogrudok was under Soviet occupation. Just as Sara Frayda was born, the German Army invaded and much of Jewish Novogrudok was destroyed during the German bombings. The Jews of Novogrudok and its surrounding areas were murdered in a number of mass killing operations from July 1941 until May 1943. Reeling from the indescribable loss of their family, Eliahu and Rochel made plans to escape the ghetto along with Rochel’s nephew, Yankel Berman.

In October 1942 they joined the Bielski Brigade, an all-Jewish partisan unit operating in the nearby forests. Eliahu was among the few partisans who had military training, resulting in him becoming a unit leader. He trained the partisans, participated in missions to sabotage German communications, went on scouting operations, and gathered food. Eliahu’s humble and polite character gained him the respect and love of everyone in the camp.

Toward the end of the war in the east, as the Soviets pushed forward, the partisans engaged in heavy battles with the retreating German Army. Just as the Soviets arrived to liberate the forest on July 8-9 1944, Eliahu was killed in a face-to-face battle while defending the camp from German soldiers. Eliyahu fought to the very end, a testament to the resilience and courage of  Jewish partisans.

Ted Winestone was born Moshe Tuvia Wajnsztejn on September 24, 1929, in the small town of Baranowicze, Poland, now the...